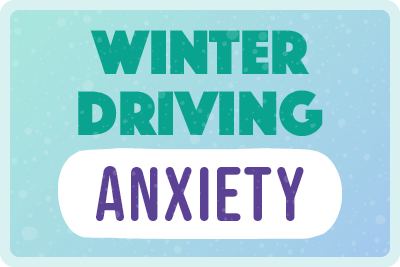 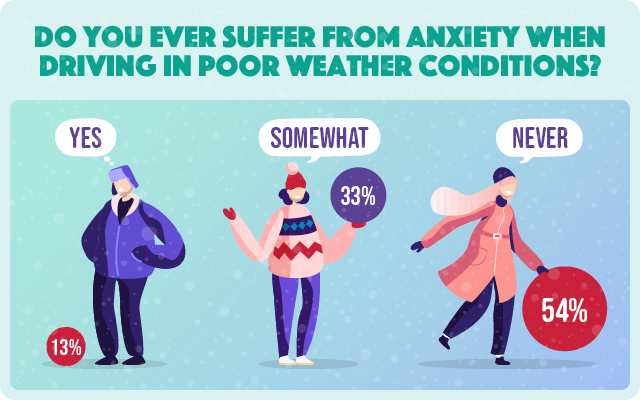 As the days get shorter and the temperature cools, we begin our shift from the warm and dry months of summer to the wet, windy, icy and overall unpredictable nature of the winter months. For many drivers, this isn’t too much of an issue, but for some, the upcoming few months can be a very stressful period.

Here at National Tyres And Autocare, we’ve recently been asking our customers to take part in a survey all about winter driving anxiety, and the results were eye-opening.

46% of drivers admit to feeling some level of anxiety when it comes to driving in poor weather conditions.

Just under half of the 800+ respondents of our survey revealed that they felt anxious when weather conditions deteriorate. This was a staggering statistic that we did not expect to see. 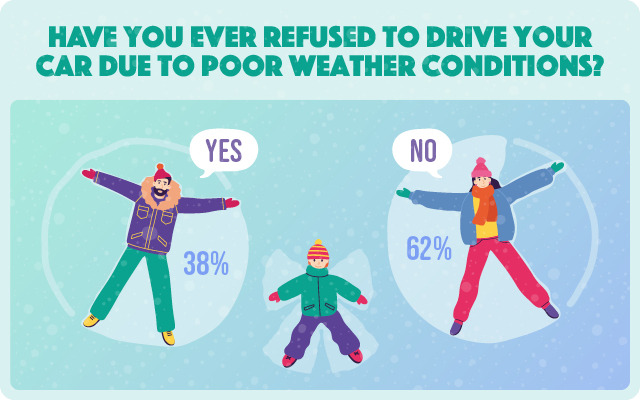 What’s more surprising are the specifics our customers unveiled about their anxieties. For example, 38% of drivers said they have refused to go out in their vehicle when the conditions have been poor. This shows that drivers’ anxiety gets so overwhelming for some that they’re not even willing to pull off the drive when they don’t feel it’s safe enough on the roads. 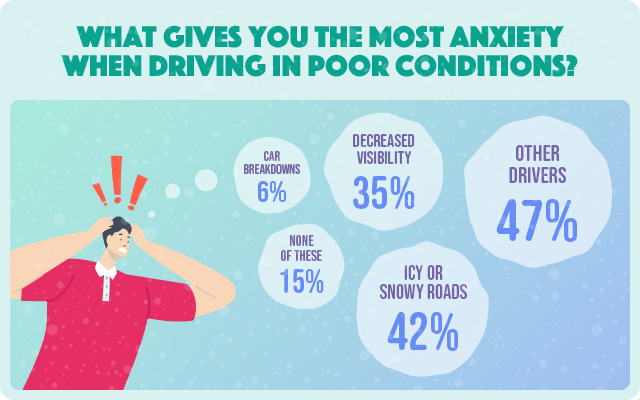 So what is it in particular that worries people about driving in these conditions? According to our survey results, many found the typical winter conditions to be the most daunting, with 42% saying that ice and snow cause them anxiety and 35% blaming the fog and darker days, which decrease visibility. One particularly interesting stat found that 47% of people found other drivers to cause them the most anxiety. 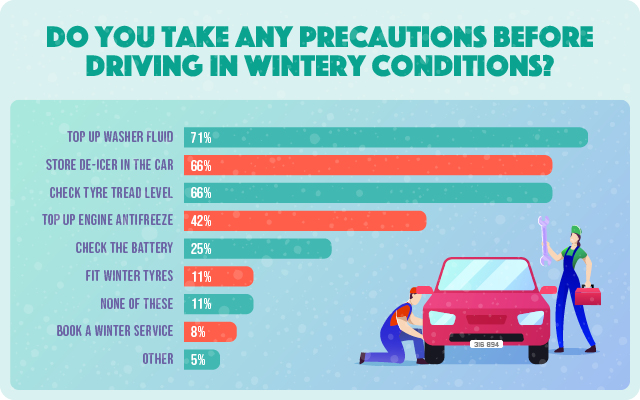 With so many people feeling anxious about driving in poor weather conditions, we were interested to find out what precautions people take when going out over the winter months. When asking drivers what specifically they did to adapt to the wintery conditions, the most popular answers were topping up windscreen washer fluid, storing de-icer in the car and checking their tyre tread levels, which made us particularly pleased to see!

However, there were a few stats that we were shocked by. Only 8% of drivers had booked their car/s in for a winter service. A winter service is an incredibly beneficial action to take before the winter months roll in as a qualified professional can access your car and make sure your car is not only performing at its optimal level but that it’s able to keep you safe if the conditions do turn nasty.

Aside from the lack of winter services, another poor stat was that only 11% of drivers said they replaced their tyres with winter tyres. Winter tyres or All-Season tyres can greatly help with decreasing your stopping distance if there comes a time when you need to brake heavily. They’re also great at preventing skidding and sliding when things get really cold, which brings us onto our next set of stats. 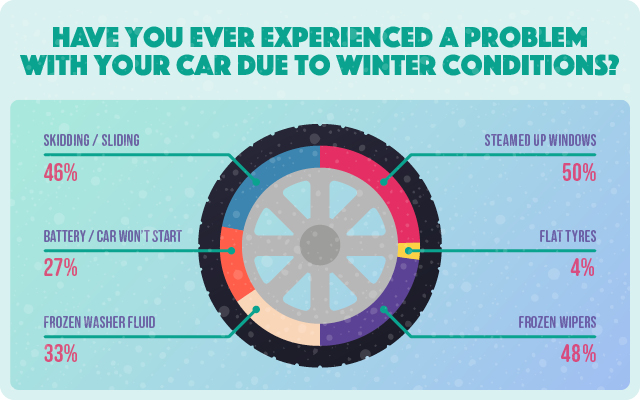 The last question we asked drivers was whether they’d experienced any problems with their cars due to winter conditions in the past. Frozen wiper blades was near the top with 48%, skidding and sliding was next at 46% and closely followed by frozen windscreen washer fluid at 33%. But the most surprising stat was to discover that 50% of drivers admitted to driving whilst their windows were steamed up, which can be incredibly dangerous and could also result in a £60 fine and three points on your licence.

As you can see from our report, anxiety whilst driving is common in today’s society, especially when the winter months roll around. The best way to combat these conditions is to take all the necessary precautions and most importantly, book your car in for a winter service! Alternatively, we also offer a FREE Safety Check that can be booked at your local National Branch. A Safety Check consists of a visual safety inspection of the tyres, battery, engine oil, wiper blades, brakes and a number of other areas to give you that extra peace of mind when driving this winter.

If you’d like a service you can book your car in with us and we’ll get your car in tip-top condition to tackle whatever comes our way this winter.

Did you enjoy this blog post? |
1 people found this review helpful

Tips to stop your car windscreen from freezing (20 Jan 2022)