What does my exhaust do?

Although there are no moving parts, your exhaust system is one of the hardest worked parts on the car. It is a series of pipes linking the engine to a silencer and a catalytic converter which performs the following functions;

The exhaust is made up of the following components:

The exhaust manifold acts as a funnel. It collects exhaust gases from all cylinders of the engine then releases them through a single opening, often referred to as the front pipe.

There may be more than one silencer box fitted to your car. The silencer is specially designed to absorb sound waves created by the engine and reduce this noise to a legally and environmentally acceptable level. The silencer joins onto the tailpipe at one end and the catalytic converter at the other.

Catalytic converters are an integral part of a car's engine management system, not simply a part of the exhaust system.

What Does My CAT Do?

Catalytic converters are designed to reduce:

How A CAT Works

When gases are emitted from the exhaust chamber, they pass into the exhaust system. A lambda sensor measures and adjusts the air / fuel ratio and stops unburnt fuel reaching the CAT directly.

When the gases reach the CAT they are exposed to a coating of precious metals which act as a catalyst on these gases, converting them from harmful to safe fumes.

Once the temperature in front of the exhaust system reaches 250°C – 270°C, the catalytic converter begins to work. This should occur around three minutes from a cold start. 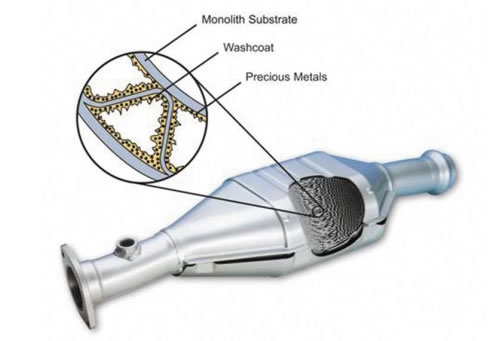 As a direct result of too rich fuel mixture and/or oil or antifreeze entering the exhaust system, deposits build up on the internal monolith, leading to a partial or complete blockage.

This blockage or partial blockage can have the following effects:

Carbon deposits can reduce the surface area which allows the thermal reaction to take place. If these carbon deposits are allowed to continue over an extended period, eventually all will become blocked and you might notice a reduction in the performance of the vehicle. If the vehicle is used with the monolith blocked the catalyst might become noisy. This is a direct result of the exhaust gases seeking an alternative route of escape and destroying the substrate, which separates the monolith from the stainless steel casing. This renders the catalyst completely inactive.

If neat fuel enters the exhaust system, the fuel will 'superheat' the catalyst and the monolith might be partially or totally destroyed. This may block the exhaust or just be burnt and blown out of the system.

A catalyst suffering this type of failure is easily recognised. The converter glows red in operation, or is externally discoloured by the effects of the extreme heat the catalyst has experienced.

Common causes of failure are:

Catalysts are exposed to extremes of heat and mechanical stress which can result in damage after a period of service.

Malfunction Indicator Light (MIL) – Illumination of the MIL does not necessarily mean the CAT is faulty. Diagnosis is required prior to a replacement CAT being fitted.

The law about CATS

From 2009 it became a legal requirement for all CATS made, sold and installed to have R103 Type Approval and affects all cars and light commercial vehicles up to 3500kg registered on or after 1st January 2001.

The only exclusions are vehicles not originally approved to EU emission standards e.g. grey imports subjected to Single Vehicle Approval.

If you notice any of the following you should have your exhaust checked by a National Tyres and Autocare technician to find out whether any components need replacing;

Please note that for an in-depth check including shoes, drums, cylinders and brake fluid, an additional charge will be made for this service due to the additional time involved. This charge will be agreed with you in advance of the work being carried out.

National stock a wide range of exhausts for many different cars and light commercial vehicles.

It's not always obvious when there's something wrong with your exhaust until it's too late! At National our FREE exhaust check carried out by skilled technicians trained to City and Guilds standards includes a full inspection for any corrosion, loose baffles, cracks, excessive noise, leaks, joint failures, condition of studs and brackets and excessive impact damage.

To book your free exhaust check online click on the link below and follow the simple steps. Alternatively call your nearest branch on 0800 432 0460.