Can You Use Winter Tyres In Summer?

In many parts of Europe, drivers are legally obligated to keep two sets of tyres – one set for summer and another for winter. Here on British shores, however, we tend to drive our tyres, regardless of their seasonality, uninterrupted until they run down close to the legal tread depth limit. But there are several key differences that optimise a tyre’s efficacy in specific conditions. 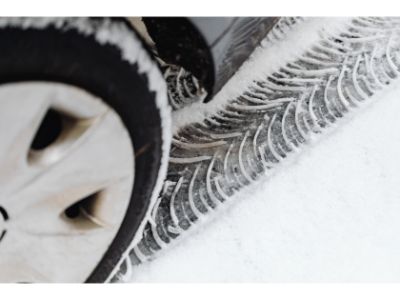 Read on to discover the distinctions between the two main sets of seasonal tyres – winter and summer – and find out if you really can roll on winter tyres during the year’s balmier months.

What’s the difference between summer and winter tyres?

The main difference is the tread material. Made from a soft rubber compound deigned to stay supple in low temperatures (below 7°C), winter tyres improve traction in wintery conditions thanks to their thick, wide treads, built-in grooves and water-wicking sipes. Conversely, summer tyres start to harden in the <7°C operating range, causing stopping distances to soar - the polar opposite of what’s required in potentially dangerous driving conditions.

How do winter tyres work?

How do winter tyres perform in the summer?

As winter tyres are specially designed for use in temperatures below 7°C, the tyre material can become too soft and elastic during the summer months. The denaturing of the tyre can lead to reduced road contact and less control over braking and cornering. Consequently, braking on winter tyres in summer takes longer as traction is lost when accelerating; a phenomenon known as tyre floating.

Perhaps even more alarming is that as the car’s speed climbs, tyre floating worsens. This is especially true in the summer months when drivers tend to drive faster due to clearer visibility and better road conditions.

Winter tyre performance in the rain

Despite their superiority in the cold, snow and ice, the performance of winter tyres will sharply decline in rainy conditions, resulting in a quicker rate of wear and noise pollution due to the soft rubber and tread undergoing rapid wear.

Increased risk from year-round use

Many motorists opt to drive their winter tyres to capacity, regardless of the season, which inevitably involves summer driving. However, driving on tyres that have reached their legal tread limit puts you at risk of injuring yourself and others, not to mention the legal ramifications that could ensue should your car be deemed unroadworthy. Drastically reduced grip and impaired stopping distances are just two of the hazards caused by improper tyre use.

While regulations stipulate that standard tyre treads should be at least 1.6mm, we recommend replacing your tyres when the tread is worn down just below the 4mm mark, equating to approximately half a new tyre’s tread depth.

This is because winter tyres lose their unique safety properties and performance quality the more that their tread has worn down, so it’s always best to err on the side of caution and replace them earlier rather than later.

It is safe to use winter tyres in the summer?

Crafted for specific purposes, seasonal tyres are just that; seasonal. Therefore, we recommend changing your tyres according to the seasons to maximise road safety and protection against the elements.

Did you enjoy this blog post? |
13 people found this review helpful